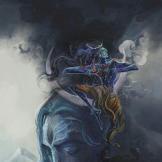 Found in cow dung after rain

Found some cap mushrooms in dung after rain northern NSW, not cubensis, much smaller, some of them very golden. Anyone know what they are?