ID - half bridgesii half scopulicola?

I have coveted this trichocereus for the last 2 years and today was my day.

I got a nice sized piece and I'd like to know what others think about it's ID.

I've always considered it a bridgesii, although it is VERY fat for a bridgesii, (it's fat for a PC pachanoi for christs sake!), it is planted in the ground and has been for at least 15 years.

You'll notice it has basically no spines on the top half of each of the columns but the bottom parts have some pretty gnarly spines, usually 2 per each areole, sometimes 2 large ones and one small one. You can also see it next to another more normal, (but certainly not a small), bridgesii I also got today. The column I was given has big spines on the bottom 12 inches but is basically as spineless as a scop on the top 3 or 4 feet. There are a few areoles on the "spineless" part that have tiny spines about 1 or 2 mm long, but most are completely bare. I've included come close up pics of the areoles with really tiny spines.

Please look at the pics and let me know what you think it may be. I think it could just be a unique form of bridgesii but I would like opinions. The flower hair was quite dark black when I saw them last summer but I have no pics of those for you. Also, it's about 5 or 6 metres high and the flowers were right up the top.

BE AWARE THE PICS ARE A DECENT SIZE if you happen to be on a slow connection. I have made them smaller but tried to keep some quality in them so detail can be seen.

BTW - also happy to hear what people think of the other bridgesii if it happens to jump out as similar to anything you know. But mainly interested in this weird, fat, sometimes spineless, sometimes spiny one. 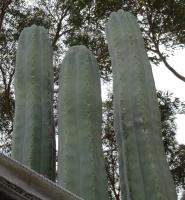 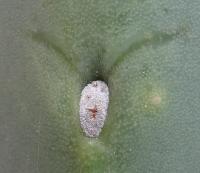 And here are some pics of the cut I got. It's next to the other bridgesii in these. 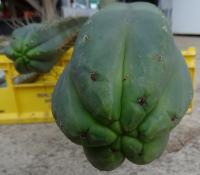 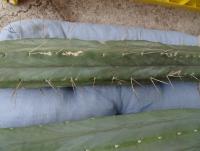 23 answers to this question