I recently was given these rhizomes as Turmeric - Curcuma longa, though the person who gave me this gift probably didn't concern themselves with botanical names. All i know is that it was given to them as Turmeric.

At a glance I do not think that this is the classic Turmeric - I've bought it fresh before and I expected the skin to be less ginger-looking and it to be much more orange, both inside and out (it's actually a bit more pale than the photos show. Apparently it's growth habit and flower are very similar to C. longa .

The freshly cut rhizome smells a lot like fresh Turmeric, but not quite the same. It has a similar taste to fresh turmeric, but not as strong and there is a hint of starch - like raw potato.

Anyone have any ideas?

I'll post some more pics as they grow a bit bigger. 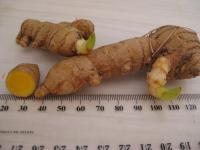 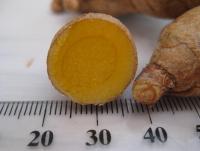