Are these panaeolus cyanescens?

I found these in a wood chip garden bed in Melbourne - The wood chips are old old, grey wood chips. There were a few of the orange P. Sub lookalikes with them. I didn't have a camera with me so I grabbed them to take photos later. My camera is broken so this is a phone shot and it doesn't show the colour properly, they're quite blue and have gotten bluer over the last 3 hours sinece they were picked. Cap is about half 5c piece size. 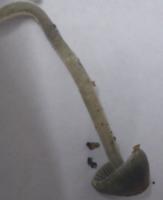